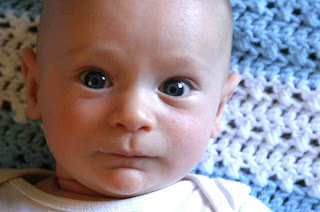 2 days after Zeke’s 3 month birthday (and unfortunately one of his worst days yet) we had one of the best days yet. As I type this, Zeke is sleeping, having fallen asleep with no bouncing, and more importantly – NO CRYING. I’m stunned, completely stunned. And I would have started typing this earlier, but I was so stunned that I just sat and watched him sleep for half an hour. I’m wracking my brain to figure out what we did differently. Was it because he napped well today? Did I time his last meal just right? Did he like his bedtime song? Is it a full moon? Do the baby gods feel bad for me since the past couple days have been so hard?

I’ve said before that I wasn’t expecting any magic once he passed the three month mark. But I couldn’t help myself – I really, really wanted to have a good day to celebrate this milestone – the end of the fourth trimester. Unfortunately, little Zekey had a different idea and he cried and fussed more that day than any I can remember. I couldn’t do anything to make him happy – he didn’t eat well, he didn’t nap well, he absolutely *screamed* himself to sleep, and he kept us up most of the night – waking every 2 hours all night long. Yesterday wasn’t much better.

But today was different.

I spent a long time theorizing with my friend Ana (mom of a fairly fussy (but adorable) 11 month old) about what was going on with Z those two terrible days. There’s a big growth spurt that happens around 3 months, and there’s also a developmental leap that happens around the same time. Also, Dave started work again which is causing stress for all of us, and I have some of my own work starting up again. All this combined to create a perfect storm of crankiness, and Zeke knows how to express that much more honestly than the rest of us.

Bedtime was so bad last night that I thought Zeke might have hurt himself. He cried so hard he choked. Nothing would comfort him. And he finally just passed out from exhaustion. I was dreading bedtime tonight – not having the energy to go through that again. We dragged out bath time for as long as we could – letting Z swim and splash around for awhile. I tried to get him to nurse for longer than he wanted to – forcing him back on the nipple three or four times. We sang extra songs and just sat quietly before swaddling him (when the crying inevitably starts). Finally, I lay him down to swaddle him – and he smiled at me! Sure it wouldn’t last, I didn’t smile back (didn’t want to overstimulate him). But as I pulled the final wrap tight, he was still calm, and Dave suggested I just put him in the co-sleeper right away.

I lay him down, put my hand on his chest, and started humming Baby Mine over and over again. Still no crying. I don’t know how long I hummed and rubbed for, but, miracle of miracles, he closed his eyes and drifted off to sleep! He usually wakes up after 10 minutes (when we generally pick him up and bounce him again) and so I waited. Sure enough, he woke up. But I was still there, rubbing and humming. And he went back to sleep! He did that a couple more times before I finally left – now about an hour ago. And he’s still asleep. I really just can’t believe it. Wow.

I have no doubt there will be many, many more nights of screaming before bed, probably tomorrow (or even later this evening). But this one night may just sustain me for the next three months.