first brew and other milestones 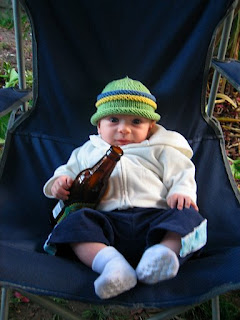 I’ll be the first to admit that this is completely inappropriate and immature. But we think it’s pretty funny. And no (mom) we didn’t actually give him any beer. But he did like that bottle!

As you can see, Z is sitting up pretty well on his own. He consistently holds his head up for most of the day, and keeps it up during tummy time for as long as he can stand being on his belly (still mostly hovering around 5 minutes).

He grabs pretty much anything you put in front of him and puts it in his mouth. He’s obsessed with these bear blankets we got as gifts – so much so that we have one in his crib and one in the car seat that we take with us everywhere. 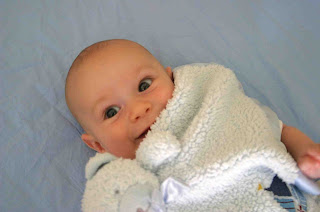 He cuddles it, rubs it all over his face, and sucks on it constantly. It’s pretty adorable. He seems much less interested in the toys on his gymini. I tried to change the placement of everything in hopes of keeping his interest, but he wasn’t fooled. Though he does like to chew on the lion feet for a little while – screaming his frustration if he can’t get a good grip. 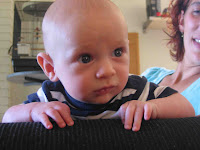 He loves to stare at our turtles and fish. He’s completely mesmerized. We prop him on the arm of the couch and he just gazes for a good long time. I think we need to get him his own fish tank pretty soon, but Dave says we need to wait until he can take care of them himself.

Another milestone – his first laugh. At his two-month appointment, the pediatrician asked us if he was laughing yet and we both kind of shrugged. But when it actually happened, it was unmistakable. About a week ago, Dave was holding him horizontally – lifting him up and down to his chest – what he calls “baby curls”. Zeke was grinning ear to ear, and then he let out the most adorable little giggle. We stopped and stared at him – wondering what that new sound was.

And after a few more curls, he was giggling up a storm. Now we spend part of every day trying to get the boy to laugh – it’s sooo darn cute. The most effective method is to basically toss him in the air and plop him down with a big sound – a “weeee!” or “kaboom!” He freakin’ loves it.

At three months, we still have our challenges – especially around sleeping. But on the whole, we’re starting to have some fun.