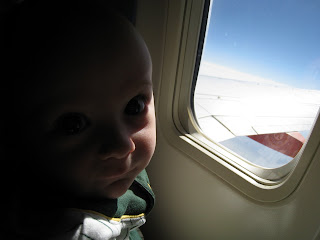 Against all intuition, we woke Z up at 4:30 am this morning to catch at 6:45 am flight to Denver, and then on to Philly for my brother’s wedding this weekend. I was absolutely dreading the flight – fearing karmic payback for all the evil thoughts I had about crying babies on planes before now, and just not wanting to be “that girl” with the screaming child. But you know what? Z totally surprised me. He was great. 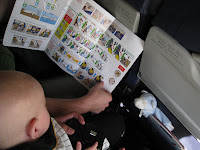 We had a row to ourselves on the way to Denver and after an hour of quiet playing, he fell asleep in his car seat and didn’t wake up until we were ready to board our second flight. He slept through the landing, getting off the plane, changing gates and waiting in line. Amazing. The second leg was packed so he had to be on our laps the whole time. But he only fussed briefly, smiled at everyone, played with his toys, stared out the window, slept in Dave’s arms for a little while, and was generally pretty content… I’m just stunned.

He then slept almost the entire two-hour ride from the airport to the hotel, and then had nothing but smiles and giggles for his Omi and Opa. And to top it all off, he fell asleep in a strange crib with nearly NO CRYING. Who is this baby?