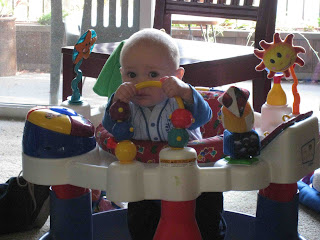 Z will be 7 months next week and while it seems like every other baby I know is settling in to a regular and relatively happy routine, my little boy is sadder and more unsettled than ever. I really have no idea what’s up with him. Maybe it’s teething (at least 3 weeks of all the teething signs but no teeth yet). Maybe it’s the cold he’s had for the past two weeks. Or maybe it’s the onset of some kind of separation anxiety. Maybe it’s his skin, maybe he’s overtired, maybe his belly hurts, maybe I’m the worst mother in the world.

I’m not really prone to this kind of self-deprecation anymore, but it’s really hard to keep my confidence up when he spends so much of every day so upset.

I can’t put him down for two seconds without him crying – REALLY crying. He cried through my entire shower this morning – even though he was sitting right outside the shower door and I sang and played peek-a-boo with him the entire time. Yesterday, I put him in his exersaucer and walked away for a moment and he cried projectile tears. (When I went back to pick him up, a tear actually hit me in the face.) He can sit up by himself now, but if I don’t sit and play with him, he throws himself onto his back and just screams. And even when I am interacting with him directly, he’s still fussy and hard to please. The only time he’s really happy is in the carrier, facing out, walking around outside.

I know some babies are just fussy, but this seems like too much, and for too long. I feel like I must be doing something wrong for him to be so upset for so much of every day. OR, there’s something really wrong with him – like he’s sick or in pain. Dave called the doctor today and explained how he’s been behaving. She said it seemed unusual for him to cry so much, but she didn’t have any specific advice other than to make sure he’s sleeping enough and to call her in a few days if he doesn’t get better. Great.

So for the third or fourth or tenth day in a row, I’m going to bed determined that tomorrow will be better. Tomorrow I will try to be more patient and more loving and better able to read his signals. I will feed him before he cries in hunger, put him down for a nap before he cries in exhaustion, pick him up before he cries in lonliness or fear of separation. I will wait to shower and check email and eat breakfast until he is napping. I will give him my undivided attention. And after an hour or two of this, I will be completely exhausted. He’ll go back to being miserable, I’ll go back to being miserable, and we’ll repeat the pattern again and again.

On the positive side, my friend Sara reminded me today that it’s a good thing Zekey feels things so passionately – a little like his mom. Great.