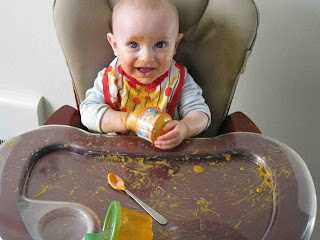 I am a terrible cook. Or rather, I’m terrible at the process of cooking. I don’t like to follow recipes, but I have no innate cooking talent to speak of, or past experience to draw from. I get bored prepping food and I get completely stressed once it’s time to start actually cooking. Hot stoves make me very nervous.

But for some reason, I really enjoy making baby food! First, it usually only involves one ingredient. Second, because you have to cook the crap out of that ingredient, there’s no pressure. You just put the heat on and leave it for a long time. And there’s no mystery about when it’s done. If it’s mushy and unrecognizable as whatever it started out as, it’s finished! And then comes the really fun part – the immersion blender. It’s like a power tool for the kitchen and I love it. You can use it in the same pot you cooked the food in so you don’t have to make an extra bowl dirty. Joy, joy.

Unlike regular cooking, you cook once and the meal lasts for many weeks. Plus, there’s something so organizationally satisfying about the colorful little cubes of food sitting in the freezer that we can mix and match for Z’s meals. He seems to like everything we give him. (Some textures, like chick peas and split peas, are a bit tricky, but he powers through with only a little gagging.)

The best part, of course, is that I feel like I’m doing something good for Zekey. I have no problem with jarred food, but when I cook it myself, I know exactly where the food has come from and exactly what’s in it. The homemade stuff has more texture then the jarred stuff and it holds together better which means slightly less mess at mealtimes.

I’m not sure what I’ll do when he wants his food to actually look and taste like food, but for now, I’m feeling like the Martha Stewart of steamed carrots.