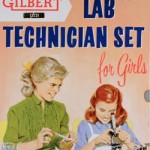 Marie Curie was amazing and all, but she’s not the only notable woman of science. Distillations honors women’s history month by profiling a number of lesser-known female chemists. First, a segment on British Nobel Prize Winner Dorothy Hodgkin. Then, we walk you through the “Ladies in the Lab” tour at CHF’s museum.

This show highlights two centuries of forensic science. First, a segment on a 19th century serial killer brought to justice by the father of British forensic medicine. Then an interview with modern-day forensic specialist Michael Eyring, who helped solve one of the biggest crimes of the 20th century by tracing microscopic paint spatter. It’s real life CSI!