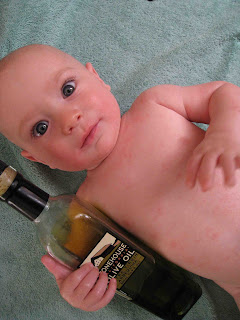 Little Z is generally a very healthy guy, but he’s got some serious skin troubles. His scalp and forehead are dry and crusty, his cheeks and lips are often chapped. His ankles and backs of his knees are cracked, he neck is always red and shiny, and he is often covered from head to toe with dry, bumpy red patches. Nice, eh? (How can he possibly still be so cute?)

We’ve tried all kinds of things to cure him – hydrocortisone cream, clotrimazole antifungal cream, three different kinds of moisturizers, two different kinds of soap, baths with no soap, and finally olive oil rubdowns. The oil works for a short time – especially on his head. (And it makes him smell deliciously edible.) The various creams work occassionally, but I don’t feel good about covering him in steroids every night. I’ve recently tried cutting dairy out of my diet in case he’s having a bad reaction to lactose through my breastmilk. But I’m having a hard time sticking to a dairy-free diet, partly because I keep forgetting, party because the idea of giving up cheese and ice cream is just too sad, and partly because I don’t believe it will actually help anything.

Andrea believes that the root of Zeke’s skin problem is in his intestines, and that by adjusting my/our diet, we can cure him of these and any future food/allergy/skin-related problems. She gave me the name of a nutritionist who specializes in things like this, and I figure it can’t hurt to see what she has to say. We also have a pediatrician appointment on Monday… so maybe we can compare notes. East vs. West. Who can turn my baby’s skin from lizard to… well… baby. 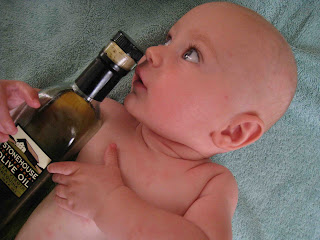 PS: I should mention that Z doesn’t seem overly bothered by these skin issues. He does scratch himself sometimes, but it doesn’t seem related to how bad his skin is at the time. It’s almost like he scratches for fun, not relief. Another question in the east vs. west showdown.