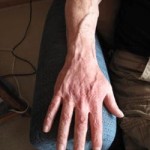 Part three of our four-part series on the original four Greek elements: Earth, Air, Water, and Fire. Segments include a review of the history of flame retardants and the legislation that has guided their use in the United States. Plus a heart-wrenching yet inspiring feature from indie producer Anna Boiko-Weyrauch. In this non-narrated piece, we learn about burn survivor Mike Mcaneny, who was admitted to Seattle’s Harborview Medical Center with severe burns over 65% of his body. He was treated with Integra, an artificial skin replacement.