Distillations #148 – Across the Pond

Distillations heads across the pond for tea time! First, UK producer Nina Perry brings her own china tea set to Loughborough University where a chemical engineer explains the science behind the perfect cuppa. Then, producer Rachel Dornhelm explains Marmite, a controversial condiment with unexpected health benefits.

It’s springtime and Distillations has babies on the brain. But we’re not oohing and aahing over these babes – we’re onto the games of the little parasites. First, Sabiha Khan shares the history of the breast vs. bottle debate. Did you know that the guy who first came up with infant formula is the same guy who “invented” marmite?! (More on that in our next show.) Then Audrey Quinn explains the many pregnancy hormones that can wreak havoc on a mother’s body, and the one that makes it all worthwhile.

Image of my little parasite at one month. He makes a quick cameo in the show 🙂

Leave a Comment
reflections on Niko at one year

reflections on Niko at one year

Niko’s birthday has now come and gone and I’ve been longing for a quiet moment to think and reflect on our first year with him. I think it goes without saying that a quiet moment is hard (impossible) to come by these days. Even now, with a blissful late morning to myself at the coffee shop while Omi watches the boys, I *should* be working, I *should* be planning for Zekey’s birthday party this weekend, I *should* be finishing my library book which is now overdue and can’t be renewed. But instead I’m looking, once again, and the pictures from Niko’s impromptu birthday party (first cupcake) and checking Facebook to see who else might have had a chance to “like” his chubby hands covering his chocolate-covered face. I’m completely smitten with this boy. 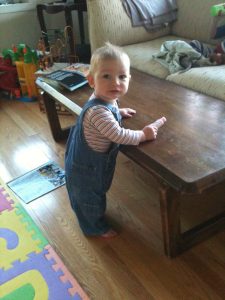 While I’ve tried to resist comparing my two boys, I can’t help but note how completely and totally different they are, and how different this first year has been with number two. Of course Dave and I have changed immensely. We’ve already reorganized our lives around kid needs and moved cross-country to be closer to a whole slew of people who give us regular and much-needed help. We’ve also become completely used to interrupted sleep, constant diaper changes and other messes, and a daily dose of chaos that I know was much more unsettling the first time around. Plus, there was the extra challenge of Ezekiel, who, while amazing and brilliant and beautiful, still manages to make me crazy every day. (More on that in another post.) But my little Nikolai has added a whole new variable to the equation. Pure JOY. He smiles… all the time. If he hears the word “yay” anywhere near him, he claps his little hands and grins. He loves to EAT – anything that’s put in front of him. He explores his world with rambunctious curiosity – moving away from us with his adorable one-legged skooch and then galumphing back into our arms. He kicks his legs with glee when someone he recognizes comes to the house, and he reaches his little arms up for a squeeze. (Seriously, this kid gives the best hugs.) When it’s time to sleep, he grabs his little lovey, rolls over, and SLEEPS (has done since 5 months old). And when he wakes up, he sits and plays for awhile or stands up and murmurs a bit to let us know he’s up. And when we come in the room to get him, that heart-melting smile again – like we’ve made his day by just showing up. 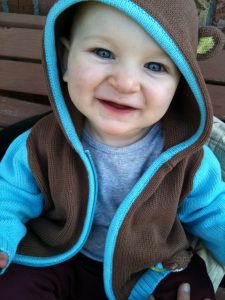 In that first year with Zekey, I spent most days trying to convince myself that I wasn’t a horrible mother. That his crying and his clinginess and his aversion to food and his night waking and his general frustration with the world had nothing to do with me and that if I could only stay calm and patient and loving that he would come around and find his own way to happiness. And meanwhile, the breaks I got from him were so welcome, so freeing. With Niko, I often feel like I have to peel myself away from him; I’m loathe to share him with anyone else, even though he has sweetness to spare. I WANT to be the one to put him to bed every night and while it would be nice to get to sleep in from time to time, I temporarily forget all about my morning haze when I nurse him in the morning – he pops off every once in awhile to grin up at me with a look that exudes “I’m happy! I love you! Life is good!”
This is not to say that we don’t have our challenges. I really can’t leave him alone for a moment. We never really had to child proof for Zekey since he wouldn’t venture more than a few feet from us. Niko, on the other hand, gets into everything. Most recently he discovered those little caps that cover the floor screws on the toilets – a choking hazard and disgustingly dirty. The more we try to keep him away from something the more interested he is in it – the drawer beneath the oven, for example. (They don’t make childproofing for that, do they?) Plus, while he will explore on his own, he’d much rather have us carry him around the house while he points at everything yelling “Dat! Dat! Dat!” and trying to make us guess what he wants us to label for him. But on the whole, my days with Niko are filled with joy. Ezekiel is a wonder, and full of joy in his own way. But for the most part, time with him is exhausting, draining. Niko fills me back up – he gives and gives and gives. 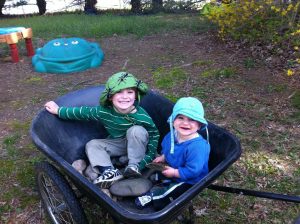 One final note – and I say this knowing that both boys will probably read this blog one day and, I hope, understand that my words are meant as an honest reflection of how I’m feeling in this moment, and not meant to be hurtful or harmful in any way. I’ve thought a lot about whether parents of more than one kid play favorites (even if they don’t admit it.) And there are many days when I feel that they must, and that everything I’ve said so far points to favoring Niko. Niko is certainly easier to deal with, and I love him so easily. Everyone says that he looks just like Dave, but it’s more than that. He has Dave’s easy-going nature. He’s content with what is, happy in his skin, full of love and patience and inner calm. Ezekiel, on the other hand, is dramatic, mercurial, perfectionistic, and passionate. He’s creative. He’s extremely set in his ways. He’s stubborn. He’s uncomfortable with change, wary of new things. In other words, he’s Just – Like – Me. It’s hard to see this reflection of myself and feel the same kind of self-loathing I’ve struggled with my whole life, only manifested in my relationship with this four-year-old boy. My hope, and what I truly believe will happen, is that I will come to love Ezekiel with the easy love I have for Niko, and in the process, find that same love for myself.
1 Comment