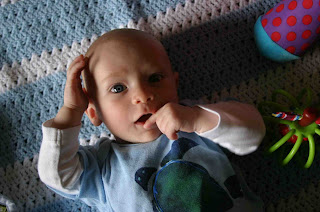 I’ve been putting off updating the blog. I guess I’ve been waiting for something to change – either for Z to mellow out and live up to the promise of a 3-month-old baby, or for my attitude to change – to feel more positive, or accepting, or maybe just a little less exhausted. None of those things is happening. So in the interest of recording both the good and the bad, I’ll stop procrastinating and put the truth out there.

It’s not getting any easier.

This is partly due to the fact that Dave went back to work last week. Okay – that has a lot to do with it. I know that I was completely spoiled having him home all summer. Most people’s partners get three weeks – if that. And I got a full three months. Amazing. And I knew it would be a hard transition once he went back, but I wasn’t prepared for the complete exhaustion of having Zeke to myself all day long, day after day.

We are slowly but surely coming up with a routine, which helps. Here’s basically how it goes.

Sometime between 7 and 9 am: roll out of bed. This is a big improvement over the former 6 am wake up call and is mostly due to the fact that I bring Z into bed with us after the 3 or 4 am feeding. He kicks and punches us a lot before nodding off, but then sometimes sleeps again until after Dave leaves for work.

I change Z’s diaper and get him dressed, then it’s my turn. I put on some music and put Z in the bouncy seat while I make the bed, brush my teeth, sometimes even take a shower. (A friend of Dave’s suggested that I bring him in the bathroom while I shower since he’d be distracted by all the noise, steam, etc. and it works! We even play peekaboo around the shower door. I’ve gotten a smile or two that way.) 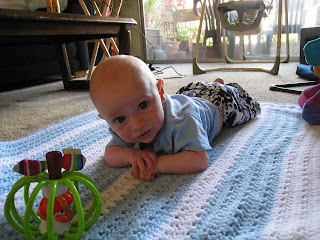 Then I feed Z and we play for awhile, sometimes in the gymini (though he’s getting very aggressive with the hanging toys – I’m afraid he may rip them right off!), and sometimes on a blanket with a bunch of new toys borrowed from his friend Nela. We do some tummy time and some baby yoga. I try to eat breakfast (usually just a Clif Bar) and check my email (a quick glance to make sure there’s nothing I need to do immediately).

I try really hard to get Z to nap for an hour sometime before 11am, but this is a huge challenge and often conflicts with our first outing of the day – either yoga, a walk around the lake, or something else – just to get us out of the house. I may prioritize the napping if things don’t improve soon, but for now, I’m prioritizing my sanity and my need to interact with other adults at least once every day.

Ideally – the first outing will last until 3 or 4 pm when we come home, I feed Z, and we have some quiet play time – reading books, singing songs, playing in the crib. I’d love to get him to nap again for a couple hours between 3 and 5 pm, but I just can’t figure out how to make that happen unless we walk again – which we do a lot. (I don’t know if I’m more tired from lack of sleep or from circling the lake so many times.) 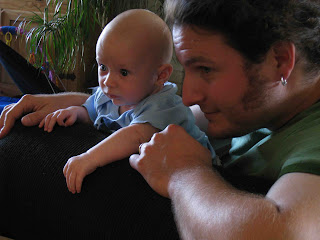 Dave gets home sometime between 4 and 6pm. If it’s earlier, I try to get some work done while Dave and Zeke play. If it’s later, we all hang out together for a little while before bath time and bed – which is sometime between 7 and 8 pm.

This all would be okay, except for one main thing. The boy hates to nap – which means that he inevitably gets overtired and overstimulated which leads to periods of hysterical crying at least once a day, usually more – and usually when I’m trying to get him to nap. It’s a vicious cycle, and it’s totally exhausting.

Even when he’s happy, Z is exhausting. He never stops moving – constantly kicking his legs and waving his arms. If I hold him, he squirms like crazy, launching himself left and right, even trying to stand up – his whole body tensed – stomping up and down on whatever surface is beneath him. He’s also incredibly LOUD. He’s definitely discovered his voice – and when he gets going, his screams are deafening. 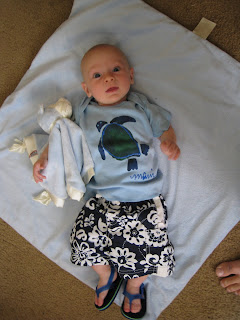 All this moving and shouting would be cute if he didn’t seem so aggravated all the time. He does this thing where he lies on his back, makes little fists, tenses his body, and grunts – turning bright red. It’s like his brain wants to do something but his body just won’t listen – so he gets really, really mad. I feel so bad for the guy, and I want to help him, but I have no idea how.

On top of all this, Z is still waking up about three times a night. He used to sleep from 7 or 8 pm straight through to 12 or 1 am. Now he consistently gets up around 10:30 – 11 pm. Then again around 1 or 2 am, and 3 or 4 am. Luckily I’m still awake for this new early feeding, but it cuts into the one time of day that I have to myself, and that has been really hard.

From 8 to 11 pm (sometimes later though I usually regret that), I recharge my batteries. It’s different (and almost more important) than sleeping. It’s the one time of day I can do anything uninterrupted. I eat, check my email, do some work, talk to Dave. Sometimes I clean. I love this time of day. I need it. And when Z wakes up before I’m ready to go to bed… well… it’s hard. 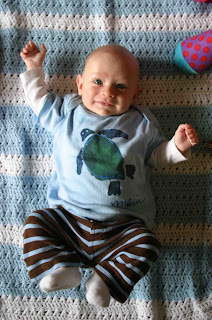 I’ll end with the positive. When Z’s in a good mood – he’s such a total joy. He smiles, he giggles, he takes everything in with these beautiful steel blue eyes (not mine, not Dave’s, if anything, like his Uncle Jeff’s, but really something all his own). He’s learning and growing so fast – it’s amazing. And taking care of him has brought out depths of patience, gentleness, and restraint I didn’t know I possessed. When things are good, it feels like an absolute priveledge to spend my days with him. And there are times when I feel that he loves me too – when he’s tired and buries his face in my neck, when he stops crying if I pick him up, and when he smiles at me when I come back to him after being away for just a few minutes. These are the things I need to focus on. And I need to remember that these days are few and precious, and that in another month, or two or six, it will get easier.