zekey has a cold 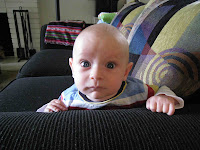 It was inevitable with a middle school teacher for a dad. Zekey caught his first cold. I have to say he’s handled it pretty well. He’s been sneezing and coughing and he sounds all hoarse and nasally. He had a low fever a couple nights ago but it hasn’t returned. And I would say he’s having a hard time sleeping, but that would be redundant.

The big irony is that he’s actually been pretty mellow since he hasn’t been feeling well. Dave said I should be careful what I wish for. I’m trying awfully hard not to enjoy this respite just a little bit. Poor guy.